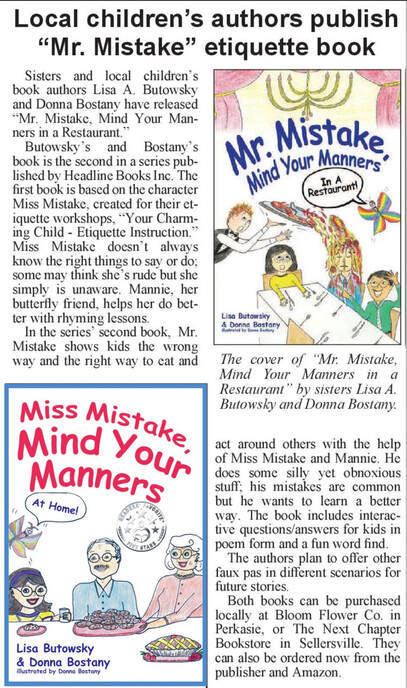 Students visited the Salute restaurant in Falls to enjoy a lunch and learn table etiquette.

Who really cares what plate to put the bread and butter on, or on which side of the plate to place the soup spoon and knife?
Lisa Butowsky does, and so do the 11 girls from Valley Day School in Falls who visited Saluté Ristorante on Wednesday to enjoy a lunch and class in table etiquette from Butowsky, owner of the Hilltown-based company Your Charming Child.
While dining on chicken Parmesan and other dishes, the students learned proper utensil placement, what liquid goes in what glass, and the respectful and courteous way to place orders with waitstaff.
Among the many other lessons were, "don't talk with your mouth full," "take small bites," "don't reach too far for something on the table," and "engage in pleasant conversation with your dining mates between bites." As a special holiday touch, Butowsky also taught the girls how to fold their cloth napkins into the shape of Christmas trees.

The students were all members of the Girls Club at Valley Day, an alternative school that serves students with various social, emotional or disciplinary issues from throughout the Delaware Valley. Supervised by Valley Day therapist Stacy Maurer, the club engages in various activities both in school and in the community.

"I don't think table etiquette is ever old fashioned or outmoded," Maurer said. "I think it's all part of being healthy and productive parts of society. Food tables bring us all together, no matter what culture we're from, and being comfortable in that setting is an important life skill."
Founded by Butowsky in 2013, Your Charming Child conducts classes in table etiquette and other social skills for individuals or groups like the Boy and Girl Scouts. Butowsky said Wednesday was her first class with a school group.
Individual classes are $60 an hour and group fees $225 to $250 an hour, depending on the size of the group, she said.
Proper table manners make a favorable impression in all kinds of settings, including at restaurants, dinner parties, wedding receptions and banquets, Butowsky said.
"No one is going to kick you out of a restaurant or out of their house if you're not doing these things," she said. "But it brings a sense of class, and you come across as a more confident and mature person, and some would say more intelligent if you know the rules of the table.

"You never know who is watching," Butowsky continued. "At a job lunch interview, a boss takes notice of these things. How you treat your server would tell a boss how you might treat your colleagues. And who would get chosen for a job? Someone who is stuffing their face, or someone who is observing the rules of the table?"
Proper table etiquette also can create favorable impressions on dates and help attract and keep a partner, she added.

"This was a great benefit because youth should start off with knowing how to properly set a table and things like that, so they can do it with their own families when they have them," said Valley Day student Naila Beatty, 17, of Philadelphia.

"You never know when you're going to have that really important dinner, or that important opportunity to impress someone at a table," said Bonnie Kovitch, 17, of Bristol Township. "It's just common courtesy."
WWW.THEINTELL.COM/TABS/BEST-OF-BUCKSMONT/MANNERS-TO-THE-FOREFRONT/ARTICLE_38DF68E4-DADD-581E-896C-C6E3D98441B4.HTML 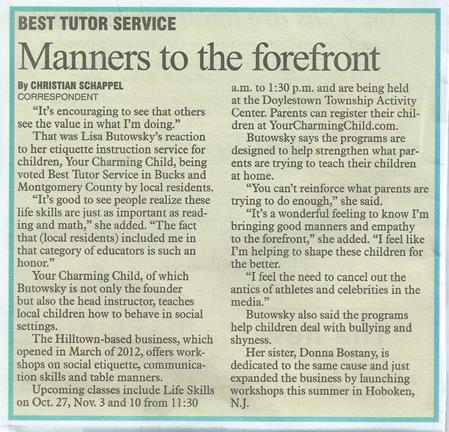 If you’ve ever seen a child behaving improperly, whether it’s not holding the door open for someone or playing with their phone at a family dinner, you can understand why Donna Bostany and Lisa Butowsky, certified etiquette instructors, feel the need to bring back the teaching of manners to children.

Bostany and Butowsky teach etiquette classes for children in Hoboken. The classes are for children age 4 to 12 and cover social etiquette, communication skills, and table manners.

Bostany has been a resident of Union City for 16 years and owes her interest in etiquette to Butowsky, her sister, who has a degree in early childhood development and has been working with children for most of her career. Bostany believes that children are the best resources for the future, and that if people can affect and help them, the results will be very rewarding.

Butowsky and Bostany got involved with Your Charming Child because they observed children’s behavior and saw a lack of etiquette, affirmed by lots of other parents. They decided that they would fix the issue one child at a time. Butowsky also spoke of her desire to contribute to society through the kids. “It works, you can see it,” Bostany said.

Getting along with others

One of the sections of the classes is social etiquette, which includes lessons like how to behave in society, how to be a welcoming host, and how to introduce yourself. Bostany and Butowsky use costumes and role play to inject fun into their classes.

The children introduce themselves, shake each other’s hands, smile, make eye contact, and even introduce a third person. Other lessons include teaching the other students interview skills and teaching the younger students proper door usage etiquette.

Butowsky spoke of a young boy who put on a crown and a mask and said he was a princess, an example of how the kids become very imaginative and come up with fun and creative names and characters during the role play exercises.

The sisters also created Miss Mistake (TM), a character who acts in all the wrong ways and does all the wrong things. Bostany and Butowsky did not develop the lessons they teach, but added to them after they took a course at The International School of Protocol in Maryland, where they became certified to be etiquette instructors. They also used lessons from a workbook that the kids can bring home so their parents can reinforce what they learn in class.

Bostany and Butowsky spoke about the reasons that parents bring their kids to Your Charming Child. Bostany said they want their children to feel confident and comfortable in social situations.

“There’s nothing worse than a child who’s awkward and shy and doesn’t know how to behave,” she said. She also said that studies have shown that success is directly correlated to social skills. Parents want their children to be successful, and having manners will give their kids a leg up on those who don’t know proper etiquette.

“These are parents who want to give their kids lots of opportunities to succeed,” Butowsky said.
Bostany said she believes that etiquette classes are important for children because we live in a world of social interaction and relationships – with parents, with peers, and in the work place.

“A simple introduction, by looking someone in the eye, shows respect, which is really what we’re after,” Bostany said. Bostany said that after children take classes at Your Charming Child, they become more helpful at home because they learned about empathy.

Butowsky added that well mannered kids are preferred playmates and are less likely to engage in risky behaviors later in their life. She said that proper social skills are essential to exist socially with other people in a society that is “striving to become a population of selfish, apathetic, robots with no need for personal reaction.” 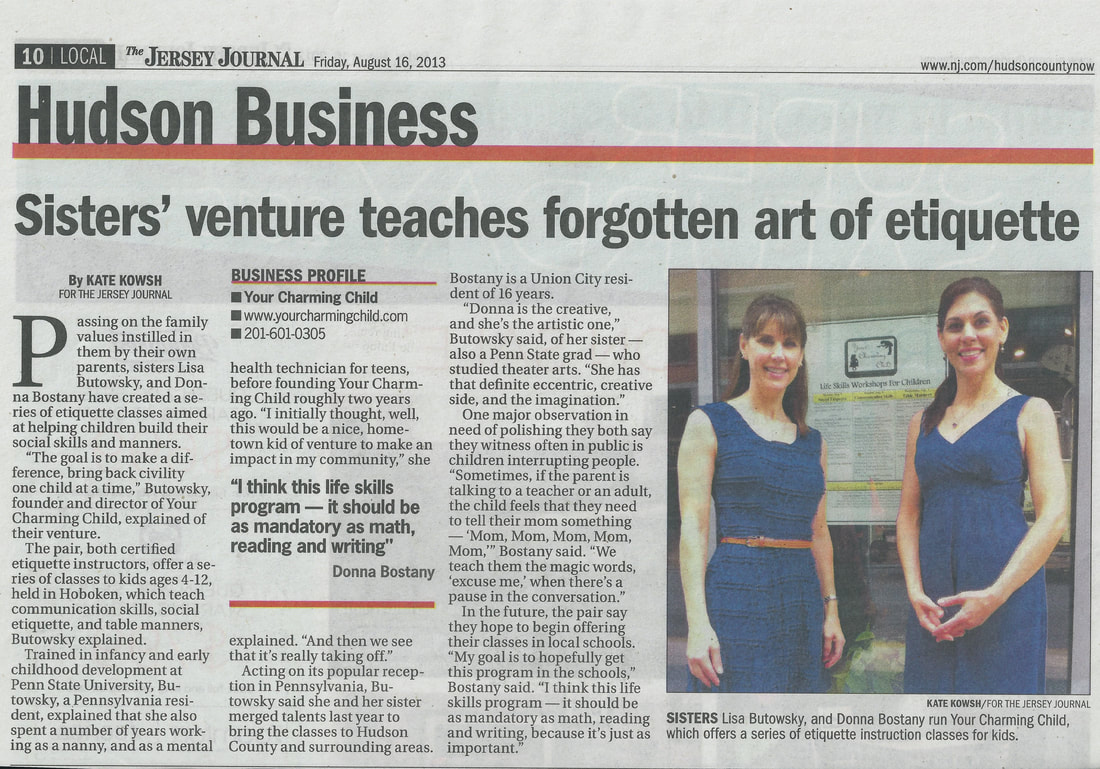 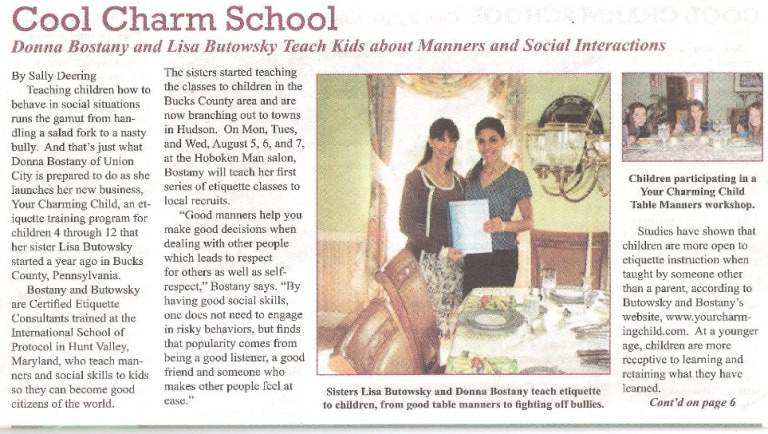 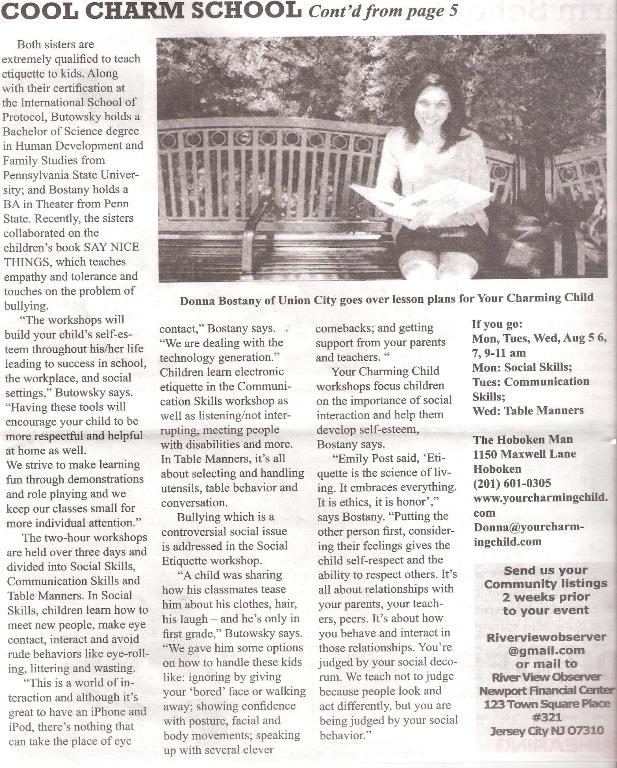 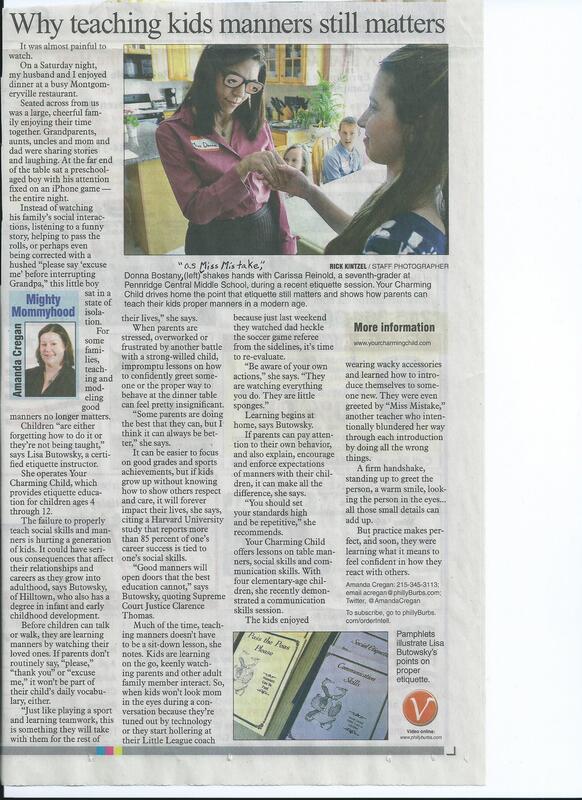 My hope and wish is that one day, formal education will pay attention to what I call education of the heart... I am hopeful that a time will come when we can take it for granted that children will learn, as part of the curriculum, the indispensability of inner values: love, compassion, justice, and forgiveness.
​